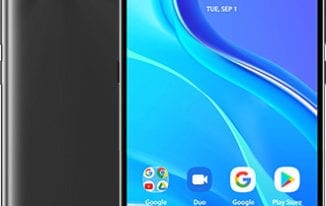 The fact that many reputable smartphone brands have flooded the low budget market shows that it’s going to take a lot more than having a low price tag and regular specs to make waves. Umidigi understands this and as such went forward to introduce the first entry-level smartphone with a contactless thermometer dubbed the Umidigi A7s, which is a less premium sibling to the Umidigi A7.

Where to Buy Umidigi A7s 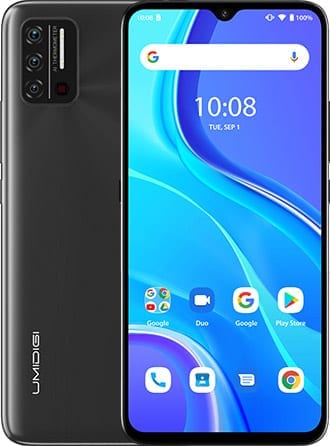 Design-wise, the Umdigi A7s can is considered to be a mirror of the standard Umidigi A7. It’s the same design on a bigger chassis. However, the absence of a rear-mounted fingerprint sensor here is going to make both smartphones a bit easy to differentiate.

Upfront we have a 6.53-inch LCD display, with a screen resolution of 1600 x 720 and a 20: 9 aspect ratio. It home to a teardrop notch which houses a front-facing camera for selfies.

Flipping to the rear, we have the Umidigi branding which indicates its a Umidigi smartphone. We also have a square camera module that houses a set of three cameras and a contactless infrared thermometer.

Part of the features instilled on the A7s to make it stand out amongst its peers in the low budget category is a non-contact infrared contact thermometer.

As its name clear reads, the non-contact infrared thermometer sensor allows enthusiasts to use the A7s to measure the temperature of individuals without making contact.

Measuring the temperature of individuals from a distance, which is part of the measures to keep safe in this period of the Corona Virus pandemic, is one of the use cases of this sensor. All other uses cases pertaining to a contactless thermometer will also work fine with this sensor.

The cameras on the Umidigi A7s for me can be described as welcomed for the price tag. It isn’t near the wonders we have become accustomed to seeing, but it is sort of encouraging when the price tag is put into consideration.

Its arsenal of camera comprises of a quad rear camera setup bearing a 13MP primary camera with an aperture of f/1.9, an 8MP ultrawide camera hinged at 120 degrees, and a 2MP depth camera. This setup is capable of recording videos capped at 720p @ 30fps.

Selfies are delivered by a single 8MP front-facing camera with an aperture of f/1.8.

The Umidigi A7s was described as an entry-level smartphone, this goes to say that we are in for low-end smartphone hardware, the type that shouldn’t be bothered with power-intensive tasks.

On the software side, the Umidigi A7s runs the stock Android interface on top of the Android 10 Go edition operating system. 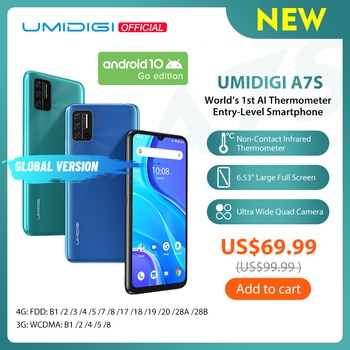 Umidigi A7  Price and Availability

However, please note that the Umidigi A7s will be available for $70, with the condition that enthusiasts must make pre-orders as from September 21. The price will revert to $100 after the pre-order period elapses.

Enthusiasts will be able to get this phone in three colours including Granite grey, Sky Blue, and Peacock Green.

Here are a few specs of the Umidigi A7s: