Taking a screenshot with the Galaxy S20 is very easy, and there are multiple ways of doing it. Below, we explain how you can achieve this, and we explore other functions and additional options, such as recording videos of your screen and creating GIF animations.

Just like with many other Samsung phones, the Galaxy S20 has different ways of capturing screenshots. To be precise, there are two more or less equally-useful methods that you can follow. Arguably, the fastest method is to simultaneously press the Side Key and Volume Down buttons. As soon as you perform this action, a screenshot will be taken. You will know when this happens as the screen turns white for a fraction of a second, and you’ll get a notification informing you that the screenshot has been saved in the Gallery.

The other way to take a screenshot is not new by any stretch of the imagination. It’s called Palm swipe to capture, and it’s been around for years, but it remains present on the Galaxy S20. Simply swipe the side of your palm across the screen, from right to left, to capture a screenshot. If the feature doesn’t work, you may need to turn it on first. Open Settings, go to Advanced features and tap Motions and gestures. Then tap the Palm swipe to capture toggle ON. Remember that you have to touch the screen with the side of your palm when performing the gesture. It doesn’t work if you hover your palm over the display. 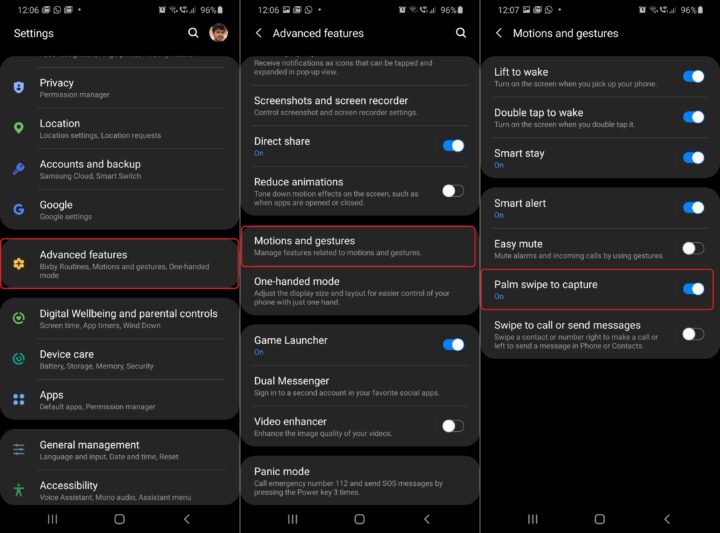 When enabled, the Screenshot toolbar will appear at the bottom of the screen whenever you capture a screenshot on your Galaxy S20. This toolbar offers quick access to a few additional tools:

You can find additional options for screen capturing by going to Advanced features in Settings, and tapping Screenshots and screen recorder. From this menu, you can enable the option of deleting shared screenshots automatically. The file will be shared but it won’t be saved in your Gallery. Likewise, you can select to save your screenshots in JPG and PNG file formats. 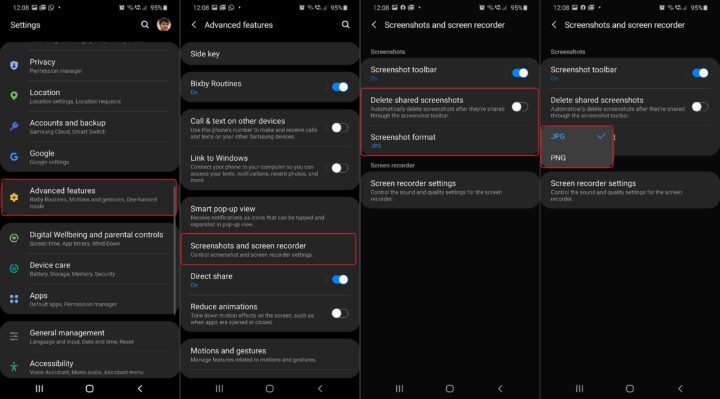 While screenshots allow you to capture a still image of your screen, you can also record your screen in video format without having to rely on third-party apps. The built-in Screen Recorder on the Galaxy S20 allows you to do this. You can find this feature in the Quick Toggle area. Tap it and select one of the following recording options:

Select the desired option and tap Start Recording. A 3-second countdown will appear on the screen. Once a recording starts, you will see the Screen Recorder bar at the top of the screen, containing a few options such as the pencil button that lets you write on the screen while you record, the person icon which enables the front-facing camera in a small selfie window, and the Stop button to stop recording. The videos you record with Screen Recorder will be found in the Gallery, in the Screen Recordings folder.

Additional options for the Screen Recorder can be found in Settings » Advanced features » Screenshots and screen recorder » Screen recorder settings. Here, you can select the quality of your videos between 480p, 720p, and 1080p. You can also change the size of the selfie window. 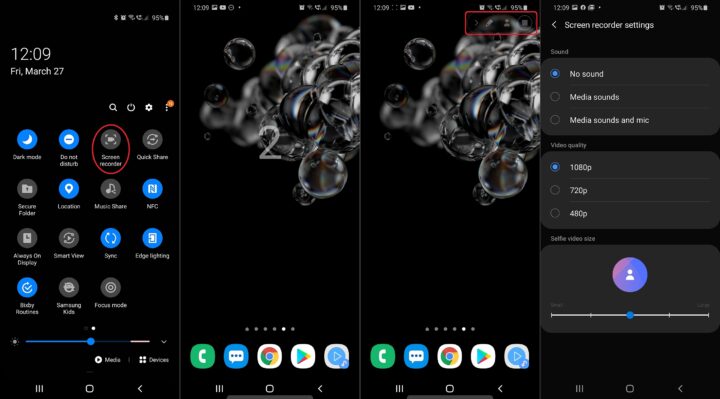 If you think this is all that the Galaxy S20 series has to offer in terms of screenshots and recording, you’ll be surprised. There’s an additional option that lets you create GIFs. The easiest way to access this feature is through the Smart Select Edge panel. To enable it, open Settings, access Display, tap Edge screen followed by Edge panels, and check the Smart Select panel.

You can now access all of the available Smart Select tools from the Edge panel. GIF Animation is the most interesting of these Smart Select tools, and with it, you can record a portion of the screen in GIF format to save it or share it with your contacts.

There are more things to learn about the Galaxy S20

As you may have noticed, the screenshot and Screen Recorder tools on the Galaxy S20 are quite extensive. But other Galaxy S20 features deserve as much of a detailed explanation, so check our Galaxy S20 tips section, and stay tuned for more.

The post Here’s every method for taking screenshots on the Galaxy S20 appeared first on SamMobile.